Wild parsnip, commonly found in the rough on the golf course,  is an invasive plant native to Europe and Asia. It was likely brought to North America by European settlers, who grew it for its edible root. Since its introduction, wild parsnip has escaped from cultivated gardens and spread across the continent.

The sap of the plant can cause severe burns. Collecting the plant from the wild should only be done with extreme care. 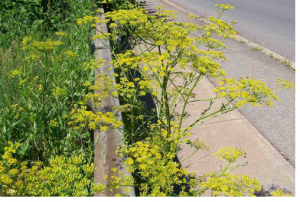 Wild parsnip, which is also known as poison parsnip, is a member of the carrot/parsley family. It typically grows a low, spindly rosette of leaves in the first year while the root develops. In the second year it flowers on a tall stalk and then dies. The plant can form dense stands and spreads quickly in disturbed areas such as abandoned yards, waste dumps, meadows, open fields, roadsides and railway embankments. Its seeds are easily dispersed by wind and water, and on mowing or other equipment.

Like giant hogweed and other members of the carrot family, it produces sap containing chemicals that can cause human skin to react to sunlight, resulting in intense burns, rashes or blisters.

Be particularly aware in the rough along the sides of  golf course fairways. If the plant is cut down the sap is exposed and there is a danger of getting it on your legs without realizing it.

Make sure you know what it looks like and take the necessary precautions. Don’t go looking for that ball if  you suspect wild parsnip is present or has been cut down.

August 16, 2018 at 6:30 am News & Views Share via:
If you have information that should be added to the site, please contact us webmaster@lccra.ca.