On Oct 9, 2014, several residents went to the Lafarge Bath cement plant to learn about and see the pilot program of the low carbon fuel process in operation. Representing the LCCRA were Paul Jepson, John Warren and Eric Clegg as Bruce Richardson, the LCCRA Lafarge rep, was on vacation.

Lafarge is currently running this 3 year pilot program to assess how best to use biomass and other waste materials as a low carbon alternative to fossil fuels. They are testing a mix of about 40% railway ties, 30% asphalt shingles and 30% construction and demolition waste as a fuel to replace some of the coal they are currently using. 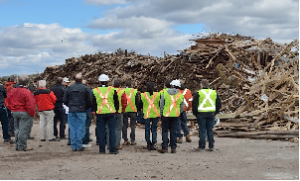 The tour began with a visit to a nearby composting and waste disposal site (Norterra Organics) where George Scott, the previous owner, gave his impassioned description of how he expanded the business about 2 years ago to include taking in construction and demolition waste. Here, pallets, waste 2 * 4 studs, windows, discarded wood furniture as well as the occasional telephone pole are literally shredded into small chips which would make it suitable for use as fuel for the cement kiln furnace. So, we asked, what happens to the vinyl in the windows and creosote from telephone poles when burned. It turns out that this contribution of petroleum-based fuel increases the kiln temperature so that these chemicals are completely destroyed resulting in reduced emissions overall. While there is no shortage of construction and demolition waste, the cost of transportation from its various sources to the Norterra plant determines how much will be used as fuel. Another major challenge is ensuring that all metal is removed before shredding, especially the larger pieces, in order to avoid significant damage to the shredding machine.

Next stop on the tour was the Scott Environmental Processing Facility. This plant accepts waste asphalt shingles which are fed into giant hammer mills to break up the shingles into small chips. The grit or aggregate found on top of the shingles is removed and returned to the shingles manufacturers for re-use. Again, the challenge is to remove all metal before it can cause damage to the hammer mills.

At present, railway ties are being brought in from Quebec to the Bath Lafarge cement plant.

Finally, back to Lafarge where we saw a truck of asphalt shingle chips being unloaded into fuel storage containers with a process to remove any last remaining metal from the waste material. Up to 75 tons per day of this biomass and waste can be burned in the cement kiln.

Average temperature in the burning zone is 1,450 celsius which is about ¼ the temperature of the surface of the sun. To ensure the destruction of unwanted emissions, the kiln must maintain a temperature of over 1000 C for over 10 seconds.  Any ash is incorporated into the cement product.

September 15, 2014 at 10:32 am News & Views Share via:
If you have information that should be added to the site, please contact us webmaster@lccra.ca.