“Origins of the Name “Martello Towers”

We know them as “Martello Towers” The name “Martello,” however, appears to have resulted from a misspelling or mispronunciation of the name of a fortification at Cape Mortella in Corsica that the British navy had found particularly difficult to capture. In early 1794, this stone tower had been attacked by two British warships, neither of which was able to make much impression on it. 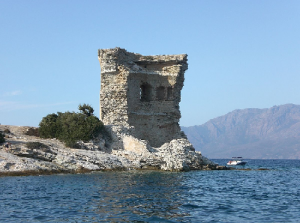 The design of the Corsican tower appeared to the British to be so effective against attack by its warships that they copied the idea and proceeded to construct virtual replicas for their own coastal defensive purposes.

It seems they intended to name their forts after the location of the original tower. However, the British towers became “Martello” Towers instead of “Mortella” Towers, thanks to a dyslexic officer of the Royal Engineers who switched the letters “o” and “a” in his report on the original towers design.

Six towers were built at Kingston. Two of these, currently being restored, were built into the walls of the branch ditches of Fort Henry and are slimmer and less massive than the typical towers.

The other four, the Murney Tower on Murney Point, the Victoria or Shoal Tower located in the water in front of the Market Battery, the Fort Frederick Tower and the Cathcart or Cedar Island Tower were “full” Martello towers and are perhaps the most complex in design of all of the Canadian versions.

Canada’s second Prime Minister, Alexander Mackenzie, who was a stone mason before he became a politician, worked on the construction of the Fort Frederick Tower at the Royal Military College.

“Origins of the Name “Murney Tower”

The Murney Tower Redoubt was built in 1846 because of the Oregon Crisis to defend the western approaches to Kingston and the St. Lawrence River from an American invasion. In dispute during this crisis (resolved by treaty 15 June 1846) was the boundary between British North America and the United States west of the Rocky Mountains, but there was concern hostilities might break out elsewhere. Similar Martello towers can be found in Quebec City and in New Brunswick and Nova Scotia. The four Martello towers (Murney Tower, Shoal Tower, Cathcart Tower and the Fort Frederick Tower) in Kingston – along with Fort Henry and the Market Battery – represented the city’s contribution to the defence of British North America. 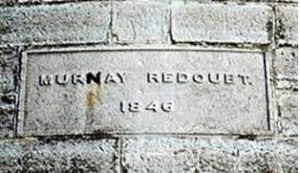 The name “MURRAY,” carved in stone on the tower, was later altered by changing one “R” to a letter “N” cast in lead and resulting in a hybrid name, “MURNAY.” Operated as a museum since 1925 by the Kingston Historical Society and five years later declared a National Historic Site, it is now known formally as Murney Tower National Historic Site of Canada.

Although 16 Martello towers were built in Canada, only 11 are still standing, four of them in Kingston. Two of these towers, Murney Tower and Fort Frederick are open to the public and contain museums. Fort Frederick houses the Royal Military College of Canada Museum. In 2007, Murney Tower became part of the Rideau Canal and Kingston Fortifications World Heritage Site – the 14th World Heritage Site in Canada and the only one in Ontario.

March 6, 2018 at 10:02 am Hobbies/Groups, News & Views Share via:
If you have information that should be added to the site, please contact us webmaster@lccra.ca.